Posted on July 7, 2018 by theheartseeker

The hallmark of evolutionary thinking is that all life is a matter of slow, gradual, nearly imperceptible changes – through massive amounts of time. Every living thing on the face of the earth came to be, because of these minor positive changes that helped them survive the dangers and challenges of living on this earth.

This slow, time-intensive process is believed to have begun in a single cell that (somehow) came alive (nobody really knows for certain HOW this happened!). Through time, this single-cell creature grew and adapted, developed and changed, until (after millions of years) we have the myriad of species that we see today. That it all happened by slow, gradual processes is the dominant explanation accepted by most scientists and taught as fact in nearly all of our educational systems. 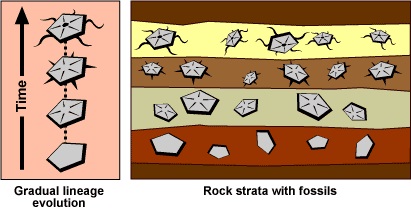 But there are huge problems that hardly anyone ever talks about. If this gradual evolution is fact – why have we never found any direct evidence for it? And: If one species is slowly changed into another species… how does it survive while it is evolving?

We have talked about this before, but it bears repeating. Evolutionists look at micro-evolution (small changes that occur as a living things adapt to their environment) and make the massive leap to macro-evolution (one thing evolves into another thing through the accumulation of many of these small changes). They conclude: “If small changes are readily observed, why not major changes through the course of time?”

But this is not the case. We have NO observable evidence… and no fossil evidence to even hint that macroevolution takes place (either in the present or in the past).

Franklin Harold (a professor of biochemistry and molecular biology) put it bluntly in his book, The Way of the Cell: “There are presently no detailed Darwinian accounts of the evolution of any biological or cellular system, only a variety of wishful speculations.”

As an example, nearly all evolutionists believe that birds evolved from reptiles.

This conclusion is drawn almost entirely from the similarities in skeletal structure between most reptiles and birds. For evolutionists, this similar structure (called homologous in most scientific circles) is a direct “indicator” of a common ancestor. Certainly, this is a reasonable inference. We should expect that the evidence supporting this inference would also be reasonable.

Take a simple thing like the necessity of reptilian scales evolving into feathers (which is the most common belief of how birds got their feathers). When you listen to the possible explanations of HOW this could occur, it sounds less like good science and more like a bad science-fiction movie.

Picture this: Heilman proposed that some early reptiles started climbing trees so that they could “glide” down onto their unsuspecting prey. Through the magic of time, the scales on their front legs began to fray and the fraying continued until, one day (eons later), full-fledged wings had formed (the ability to fly soon to follow)!

But when you look at the real science involved you notice some major obstacles to the plausibility of this evolutionary tale. As Michael Denton, in his book Evolution: A Theory in Crisis, points out: “Any degree of fraying would make the scales pervious to air, thereby decreasing their surface area and lift capacity.” In short, frayed scales take the ability to fly in the WRONG direction – essentially making flight impossible.

And what about this tree-climbing, dive-bombing reptile while he is waiting to get his wings? His scales become less and less effectual in their protective functions while he waits for the slow, gradual transformation to feathers to occur. The advantage of his scales becomes less and less, making his survival far less likely.

To get to functional wings, he has to gradually lose the functionality of his scales (and his front limbs) – making his species increasingly vulnerable to elimination.

The scale to feather problem is just one of many. Birds and reptiles may have homologous skeletal structures, but that is about all they have in common.

A bird’s lungs and respiratory system are drastically different (unique among all species!). Their heart, cardiovascular system, and gastrointestinal system are vastly dissimilar to reptiles. These would also have to undergo the time-intensive gradual transformations necessary to become something entirely different (also with the same problems of non-functionality while becoming something else!).

Denton concluded: “Altogether it adds up to an enormous conceptual difficulty in envisaging how a reptile could have gradually converted to a bird.”

At some point, a reasonable mind would have to say: “It couldn’t have happened that way – it’s just not plausible.”

But that leaves us with only one other reasonable option. Maybe, just maybe, reptiles and birds were separate species from the very beginning. Maybe they didn’t have to become something else (or something better). They could just be what they were made to be. Maybe a Creator made them exactly what they are.

I know that sounds like faith… and it is. But it is faith that is backed by the actual evidence that we see… and that we have discovered in the fossil record. We have reptiles. We have birds. There are NO half-reptile/half-birds.

Someone has said: It takes more faith to believe in evolution than it does to believe in a Creator. When evolutionists finally get around to explaining HOW they think evolution occurred, we can see why.

I have spent years studying the Scriptures and seeking for God's answer to the question: What IS true Christianity? Let me share some answers with you...
View all posts by theheartseeker →
This entry was posted in Belief, Creation, Daily devotional, Evolution, God as Creator, Intelligent Design vs. Evolution, Science and tagged Creation or Evolution, Intelligent Design, Problems with Gradual Processes. Bookmark the permalink.