Over the weekend, my wife and I went to a state park with an astounding history. About a thousand years ago this park was the site of the largest city in North America – inhabited by a people who left an enduring mark on the landscape. The site is now known as Cahokia Mounds and was the home of the mound-builders – a civilization known for the manual construction of enormous mounds of earth. 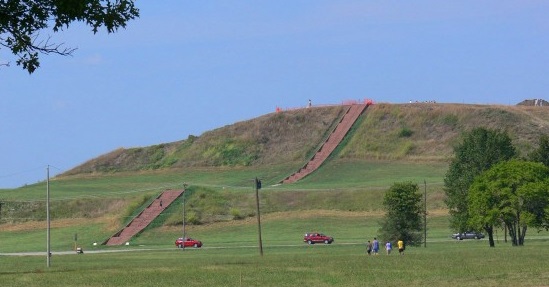 Even after 700 years most of these gigantic mounds remain – a testament to the people who labored continuously, for centuries, to build them.

As an example, the largest of the mounds (a plateau-topped mound wider than the ancient pyramids in Egypt) took nearly 200 years to complete. Day after day, workers would dig up dirt (with stone tools), carry (in baskets) 50-60 pounds of earth to the assigned site (often hundreds of yards away) up a steep embankment to dump their load

and return for more. Hour after hour, month after month, year after year, for their whole lives… all they did was carry dirt up a hill and dump it. Dig. Fill. Carry. Walk. Dump. Repeat. Until they died… and their basket was passed on to the next willing worker. This went on for generations until the chief declared your task complete… and you moved on to the next mound-building project.

As I walked up the tallest mound (over 100 feet high) several thoughts ran through my mind.

What kind of people would give up their lives for such a seemingly irrelevant cause? Can you imagine anything more mundane than living your whole life moving dirt? Yet the majority of the 15-20,000 residents of this great city did just that – for nearly 400 years!

What would be the cause that would inspire and motivate people to labor so intensively for hundreds of years? This is much easier to answer and to understand. Such is the power of religion.

The people of the Cahokia Mounds were giving their lives for their beliefs. They believed their chief was in touch with the gods (of the heavens) so in obeying his every wish, they were obeying their gods – and earning favor with their gods for the afterlife. 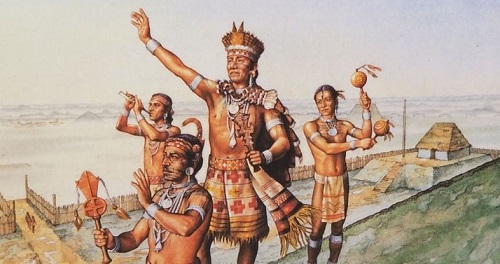 When the chief said, “Move dirt. Build me a high and holy platform up to the heavens.” The people moved dirt and built. When the chief declared, “the gods want human sacrifices.” The young women rushed forward to volunteer. And when the chief died, his wife would be willingly put to death, so that he would not go into the afterlife without companionship.

All the mounds that we witness today (over a hundred of them) are the remaining edifices of the will of humanly-exalted men, imposed on a submissive people, all in the name of religious belief… for “eternal” gains.

The cynical among us might declare: “Right. So how is that any different from Christian faith?”

In just this way… the true message of Christianity is that the exalted One came down from His lofty place, became one of us, and did ALL the intensive work necessary to give us ALL our eternal status with Him. The true message is that we do NOTHING (mundane or even spectacular) to earn or gain our God’s favor. He did all the work. 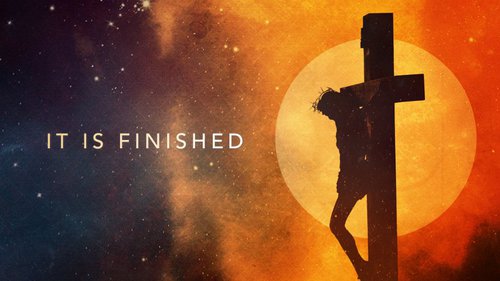 Nothing remains to be done but to enjoy His companionship – and to work side-by-side with Him in what HE wants to do.

The truth is that we are all building mounds (monuments) that will be submitted to the test of time. The ones we build to try and impress God (or other people) may gain the recognition of others… but will crumble to dust in the light of eternity. But the ones built in relationship with the Most High (according to what HE wants to do) are unseen, but truly enduring… for all eternity.

I have spent years studying the Scriptures and seeking for God's answer to the question: What IS true Christianity? Let me share some answers with you...
View all posts by theheartseeker →
This entry was posted in Daily devotional, God's provision, religion, Sacrifice of Jesus, Uncategorized and tagged False Religion & False Hope, Power of Religion, What We Build for God. Bookmark the permalink.

with the Holy Spirit of promise. Eph 1:13