Drawn to the Light 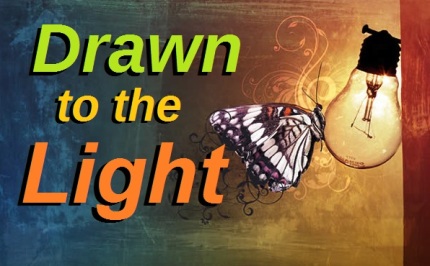 Like most folks, we have a porch light by our front door – for guests or friends who arrive (or leave) after dark.

However, this time of year, we have a bunch of unwanted guests (various flying insects!) that flock to our doorway – whenever that light is beaming in the darkness. It’s like they can’t help themselves… they are drawn to the light.

This is at the core of Jesus’ approach to the darkness of His day.

His method was to shine the love of God so that people would be drawn to hear the word of God. It is the word of God that liberates from the chains of sin – and that illuminates people from the bondage of darkness.

Jesus spent His time being the Light… to draw, and open, darkened hearts.

Jesus was the living, breathing representation of the character and nature of God. And when He came, He loved and served people – because He knew that hearts had to be opened for the Light to break in – and to change people’s lives.

He did what the Light does… show forth the character and nature of God, so people could be drawn to the love of God… so the truth of God could get in.

Jesus gave His disciples another picture that solidified His approach for them. He told them they were “a city on a hill” that “cannot be hidden.”

For you and me, this analogy doesn’t mean too much. But for His disciples, it brought an immediate understanding.

In those days, when you traveled from town to town, you walked.

It was arduous. It was slow. It was tiring. And when you were worn out from your journey there was nothing better than to look up and see a city on the next hill (where they were built in those days). It was especially wonderful if night was quickly approaching!

The city meant rest, food, drink, safety. Everything a traveler could need.

The city on a hill was a welcome sight. It lifted the spirits of weary travelers. It quickened their steps. It invitingly drew them – to provide what they really needed.

Jesus acquainted this “city on a hill” to being the Light. After He gave the disciples a new identity (“You ARE the Light of the world”) — He immediately gave them the picture of what this meant (“a city on a hill.”)

Being the Light of the world is so much more than being morally pure, or doing all the right things, or having a great deal of religious knowledge. Being the Light is the means by which we draw people to eagerly open their hearts to God.

The Light IS like the city on a hill – to welcome weary travelers who are seeking shelter and sustenance from the dangers of darkness.

What Jesus is telling us (and what His life of ministry has shown us) is that our Christian life is meant to be spent in drawing people to the shelter and sustenance of God. Our Christian “duty” is not religious rigor, or to be a moral magistrate, or even to right all the wrong in the world – our task is to love as Jesus loved.

I have spent years studying the Scriptures and seeking for God's answer to the question: What IS true Christianity? Let me share some answers with you...
View all posts by theheartseeker →
This entry was posted in Being the Light, Daily devotional, God's love for sinners', Grace and Truth, Identity, Just Like Jesus, our identity in Christ, True Christianity and tagged Being the Light, Drawn to the Light, Loving as Jesus Loved. Bookmark the permalink.