A Theist looks at atheism; part 2

In the April 2016, issue of National Geographic, there was a feature article entitled: The World’s Newest Major Religion: No Religion. In the article, the author explores the exploding trend of people who are turning from religious faith to a position of religious unaffiliation:

“The religiously unaffiliated, called “nones,” are growing significantly. They’re the second largest religious group in North America and most of Europe. In the United States, nones make up almost a quarter of the population. In the past decade, U.S. nones have overtaken Catholics, mainline protestants, and all followers of non-Christian faiths.”

In human history, there have always been people who did not believe in God – but this new trend seems to be making “non-belief in God,” popular. Many more people are rejecting religious faith and linking up together in the bonds of their skepticism.

Bottom line… traditional religion is fading… and non-religious affiliation is growing – by leaps and bounds.

Of course, the real question is… why?

There are several reasons. The article points to such things as: 1) financial security (i.e. being without need means you have no real need for God); 2) higher education (many educational institutions have rejected God and religious values); and 3) the acceptance (and advancement) of science as the revelation of what is real (technological advancements which emphasize the power of human intellect and ingenuity; and evolutionary theory being declared as “scientific” fact).

In so many words, modern society has concluded that we really don’t need God anymore – we have ourselves, and we have evolved to be pretty capable on our own.

So… if we have put God out of a job – then, why do we need Him around anymore. In modern minds, the existence of God has lost its necessity – and if He is unnecessary, why bother to give Him a second thought. From there, it is just a short step from: God is irrelevant, to… He doesn’t exist at all.

How does God react to this? I am sure He is disappointed… but He is not surprised.

Even in Jesus’ day, He looked around at people struggling with faith, and openly wondered: “When the Son of Man comes (again), will He find any faith on the earth?” (Luke 18:8) And the apostle Paul told us of the natural progression of those who reject God, in Romans 1:18-32! He warns that the “faithless” become “futile in their thinking; claiming to be wise, they (become) fools” (v. 21) and eventually, they do not just deny the existence of God, they actually become “haters of God.” (v. 30)

Whenever human beings think too highly of themselves, and find comfort in their own independence – there is always the danger of putting God on the shelf… then, eventually, up in the attic (where we tend to forget about Him altogether!). At least, until some crisis comes along and we discover that we are not quite as powerful, or ingenious, or independent as we thought.

Prayer focus: God, thank you that each day, I can live out my faith by trusting in You. 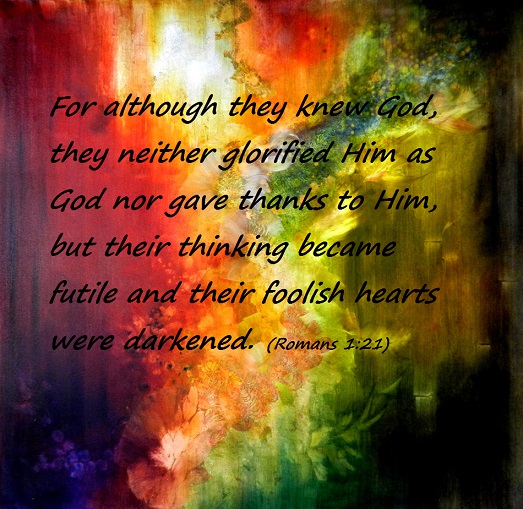 I have spent years studying the Scriptures and seeking for God's answer to the question: What IS true Christianity? Let me share some answers with you...
View all posts by theheartseeker →
This entry was posted in Atheism, choices, giving thanks, religion, True Christianity, Trust, Truth of God. Bookmark the permalink.